WIP which is now a “mizrach,” rather than an amulet

My daughter suggested I use the periwinkle on top of the dark blue, for the upper “window.” What a good idea! I had to cut out a new periwinkle piece as the other one was the wrong size, and I ruined it by trying to shave off bits from each side. I’ve decided that this one won’t be an amulet, but will be a mizrach, instead. Here’s what I wrote about mizrachim (that’s the plural of mizrach), for a previous mizrach quilt.

What is a mizrach? (For those who don’t know):

The word mizrach means “east” in Hebrew, and indicates the direction of Jerusalem. When Jews pray, we generally face east, towards Jerusalem. The custom of having a mizrach developed after the destruction of the Second Temple (70 CE). Diaspora Jews would leave a small portion of the eastern wall in their homes unfinished, with the bricks exposed. This served both to indicate the direction of Jerusalem and as way of mourning the destruction of the Temple. Over the years mizrachim evolved into a separate plaque, which was placed on the eastern wall, with the word “mizrach”, i.e. “east” on it.

Creating a mizrach is a wonderful opportunity for an artist, because it can portray any imagery. Also, mizrachim can be made out of any material, such as mosaic, beaded, wood, (fabric of course), or even water colors on paper. As long as a mizrach contains the word, mizrach, it’s “kosher.” I chose to depict middle eastern architecture, such as one might see in Jerusalem, because the essence of this custom is a longing for Jerusalem. 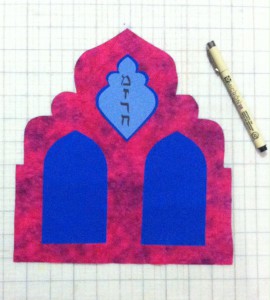 I wrote mizrach in Hebrew with a Micron pen. I practiced by writing it on the backing paper from the fusible web, which you can see in the first photo at the top of this post. 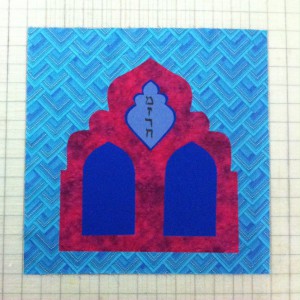