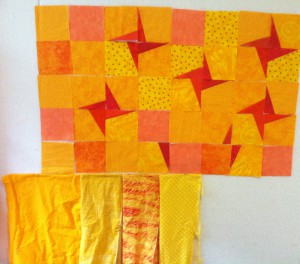 I bought four new yellows at New Pieces. I’m auditioning them to see if they will play nicely with the colors already in this quilt. I’ve cut them into squares so that I can really see how they work. I decided that two of the four worked. Going from the left, the first and third fabrics are in. (The second fabric was too tan, and the fourth one was too bright a yellow, especially since it has white polka dots on it). 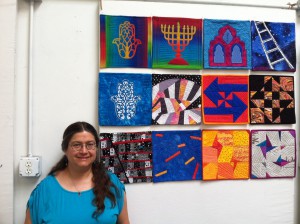 This is what it looks like now, at the end of the day. I’ve increased the size so that it’s nine squares across rather than eight. It’s Friday afternoon, and I need to stop now and make dinner. This weekend will be so busy that I may not sew again until Sunday evening.

This entry was posted in Improvisational piecing, Work In Progress and tagged New Pieces Quilt Store. Bookmark the permalink.