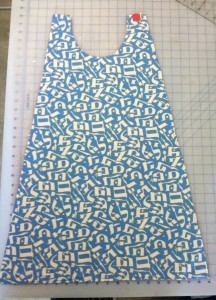 A little boy that I know just had his 3rd birthday. Back when I had a 3 year old, more than 20 years ago, I made some capes for the preschool auction. At the time, I traced around a cape among the school’s dress ups onto a brown paper bag as a pattern to cut around. The question I asked myself was whether I still had the paper pattern in my sewing cupboard, or did I throw it out? It’s hard to know what size to make a cape for a 3 year old, if you don’t have a 3 year old around, to measure at home. I looked for the brown paper pattern, and couldn’t find it. I had a vague memory of throwing it out. Then I remembered that I had cut out a cape of pirate fabric that I never finished. If I still had it, it would be in my box of children’s and novelty fabric. I found it on the very bottom of that box! I used it as a pattern to cut out two pieces of fabric, one for the front, and one for the back. Although I originally intended for the alef-bet fabric to be the front, I think in reality the orange will be the front. I machine appliqued an “A” on the orange for his name. Orange is his favorite color. The little red square is Velcro. 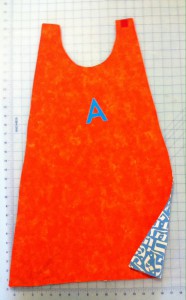 Here’s the other “front.”

This entry was posted in Work In Progress. Bookmark the permalink.