Lone Robin with the 4th element 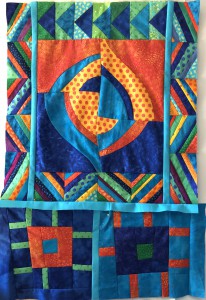 The 4th element to be added to the Lone Robin is squares. The squares can be regular squares or wonky squares. I’m adding a lot of squares to the bottom. I haven’t sewn the squares to the rest of the quilt because I’m waiting to see what comes next!

This is the baby quilt I’m almost finished with. I’ve already put the binding on. All it needs is the label, which will be heart shaped. It’s a two sided quilt and I don’t want the label to detract from the back. Here’s the back 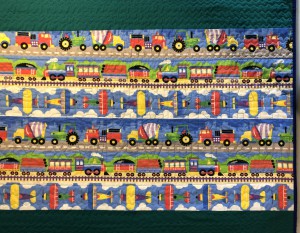 This is a present for my friend Robin’s grandson, who hasn’t been born yet. I asked for the couple’s favorite colors. I was told, “ocean, forest, sun-just like our wedding colors.” so I gave them fish in the ocean on the front, and yellow and green on the back.

I didn’t look at the alphabet panel carefully when I first sewed the front together. I then realized that it was a double alphabet. I felt the quilt was too large in any case, so I took the second alphabet out, and sewed it back together, smaller. 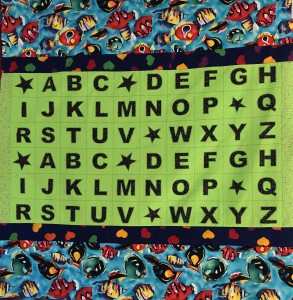 Here it is before I shortened it.

Posted in Baby quilts, Work In Progress | Leave a comment 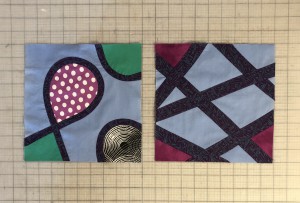 Since I’m the co-chair of Workshops for EBHQ (East Bay Heritage Quilters), I get to take the workshops for free in exchange for my work. In the before times that meant setting up tables, buying the teacher’s lunch, making coffee, and organizing clean up. Now it means that I’m the Zoom host. Today’s workshop was all about bias tape quilts with Latifah Saafir. I enjoyed it much more than I thought I would. I didn’t know that I would like working with bias tape so much! Here are the two blocks I made. Both are my own improvisational design.

I took a Zoom workshop with Latifah Saafir! 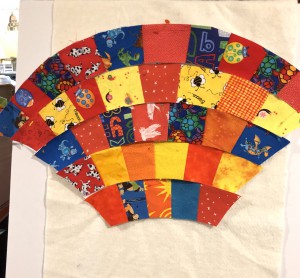 Today EBHQ had its first Zoom workshop since Shelter In Place. Latifah Saafir was the teacher. This is her paper pieced Molehills pattern. Since I never make want to make someone else’s pattern or make a quilt that looks like someone else designed it, I’m thinking of inserting these arcs into a square or rectangular block, and making a baby quilt. 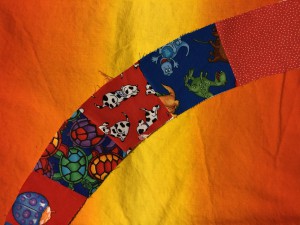 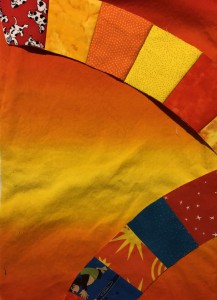 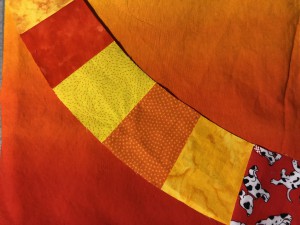 Continuing to add to my hamsa quilt 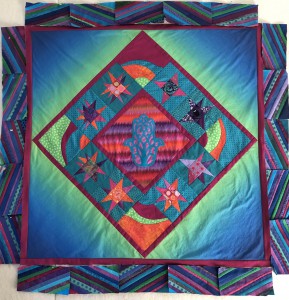 I had so much fun with the string blocks on the Lone Robin that I decided to add larger ones to this quilt. My question is what 4″ block to put in the corners? I was thinking of a liberated star on a background similar in color to the sashing, but now I’m thinking maybe lime green??

Lone Robin with the third element 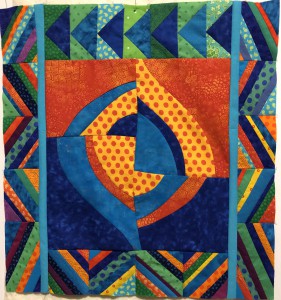 Here’s my Lone Robin with the third prompt, stripes or strips. I used a foundation piecing technique that uses newspaper as the tear away foundation. 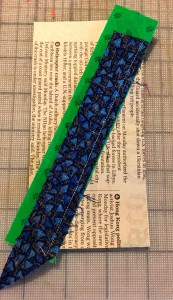 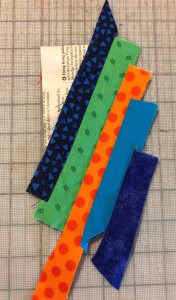 Keep adding strips. The ends can be triangles rather than strips. 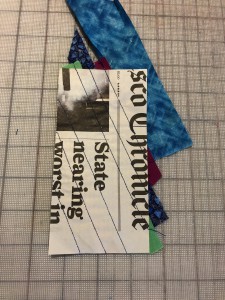 Trim from the back, using the paper as a guide. 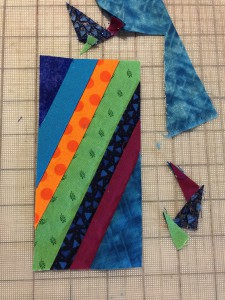 Posted in String and strip piecing, Work In Progress | Leave a comment

It’s exactly 100 years since women won the right to vote! 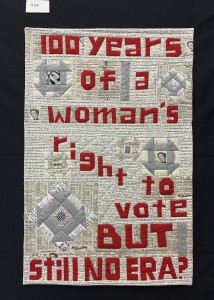 Here’s my quilt for the online show 100 Years of Women’s Progress. Follow this link to see the whole show: https://www.centuryofwomensprogress.com/claire-sherman

Here’s what I wrote about this quilt:

I was a teenager in the 1970’s when I first heard about the Equal Rights Amendment, (the ERA.) I was shocked to learn that it hadn’t been ratified yet, and it wasn’t part of the constitution. How could the constitution leave out something so fundamental? “Equality of rights under the law shall not be denied or abridged by the United States or by any State on account of sex.” The amendment needed to be ratified by 38 states before becoming part of the constitution. We were one state away from ratifying it, when the time limit ran out.​

I wrote a haiku, but like many things in life, the words couldn’t be contained on just three lines. 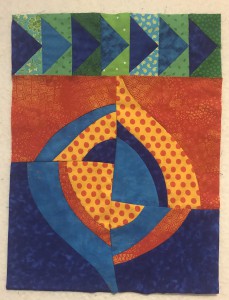 Here is my Lone Robin with the second element: flying geese blocks. I chose to put them only along the top. There are now 100 quilters signed up for the Lone Robin with EBHQ, and possibly an equal number at SFQG, though there, they don’t sign up, they just do it. There are also a few quilters in the Liberated Quilters FB group making Lone Robin quilts, including one from New Zealand, who posted her Lone Robin on the SFQG page. 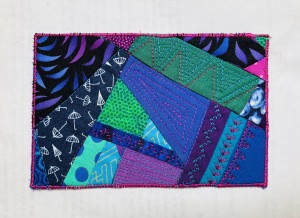 Here is the postcard I made and sent to Fredda. I used some of the fancy stitches I rarely use on my machine. 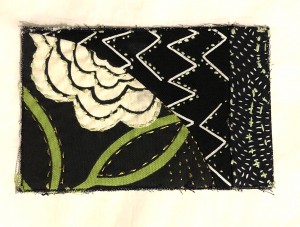 Above is the lovely postcard that Fredda mailed to me! She put a lot of hand stitching in it. 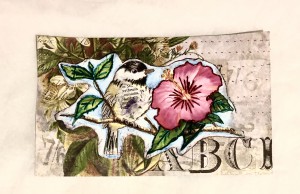 Here is a lovely paper collaged, hand embroidered card that Ernestina gave me just because! 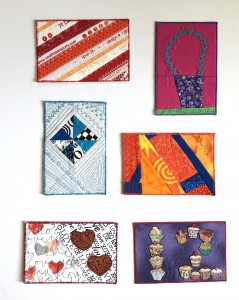 In the EBHQ Meet Up group next Thursday, we are going to have a postcard swap. People will be grouped into pairs and send each other postcards through the mail. Here are some postcards I’ve made over the years.