I got an email from the Chinese Historical Society of San Francisco asking if they could borrow my quilt about Maggie Gee again for a show. I looked and looked for the quilt- it’s quite small, about 20 inches in height, but couldn’t find it anywhere in my sewing room. I finally emailed back that I couldn’t find the quilt. They replied that they already had my quilt from the previous show. The show my quilt was in was called Towards Equality, and the next show is about WWII. I totally forgot that my quilt was already in the museum. This will be the third show this same quilt will be in the societies’ museum in SF Chinatown. 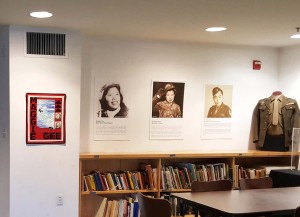 Here’s a photo of my quilt hanging in the museum.

And here’s a brief bio of Maggie Gee:

Margaret “Maggie” Gee, 1923- 2013 was born in Berkeley, CA. As a child, she loved to watch the planes take off and land at the Oakland airport, and dreamed of becoming a pilot. When the U.S. entered WWII in 1941, Maggie quit UC Berkeley and became a draftsman for the war effort. Her mother got a job as a welder, building Liberty ships. In 1943 Maggie and two friends decided to go to flight school with the hopes of joining the Women Air-force Service Pilots (WASP). They pooled their money, bought a car for $25, and drove to Nevada. After a rigorous test, Maggie was accepted into WASP training one of only two Chinese American women to do so. Though not allowed in combat, she trained other pilots. After the war she became a physicist for Lawrence Livermore Laboratory. With a passion for politics, she served on the California Democratic Party Executive Board.

This entry was posted in Quilt Shows and tagged Maggie Gee. Bookmark the permalink.

One Response to Maggie’s quilt